No Sprinkers in Fire Station Fire

No Sprinkers in Fire Station Fire

A Norfolk fire station gutted in a blaze that destroyed a fire engine had no sprinkler system, a senior 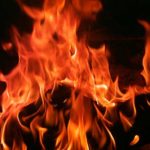 officer reveals. Norfolk’s deputy chief fire officer Roy Harold said the service should have followed its own advice. Police officers working nearby reported the fire in Downham Market just after midnight. It started in the bay where the station’s engine, costing up to £250,000 to replace, was destroyed.