The British Automatic Fire Sprinkler Association (BAFSA) requested BRE Global carry out a test to investigate the effect of a sprinkler system on the growth and spread of a fire in and between cars in a car park stacking system. This request followed the Communities and Local Government (CLG) Sustainable Buildings Division research programme titled Fire Spread in Car Parks. BAFSA wished to carry out an additional test using the CLG Car Stacker Rig in order to demonstrate the effect that a sprinkler system would have on the fire.

The test was designed to replicate the test carried out under the CLG program of research, but with the 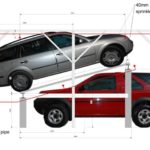 It is BRE Global understands that the system was designed by the client to be as consistent as possible with the prescriptive guidance given in BS EN 12845, LPC Sprinkler Rules. However, sprinkler protection of real car stackers will require the installation of a sprinkler system on a number of levels depending on the height of the storage. It was therefore considered appropriate by BAFSA to trial a number of hydraulic designs and sprinkler heads prior to the fire test.

A number of cold discharge tests were conducted with the installed sprinkler system to evaluate the water discharge profile from a number of different sprinkler heads spray patterns and arrangements. Based on the findings of the cold discharge testing a 15mm 68°C ‘Conventional’ type sprinkler model was selected as providing an optimised water discharge profile for the hazard. It was found in these tests that the ‘Conventional’ type sprinkler gave a water spray pattern that would wet adjacent cars and therefore would be expected to stop the fire spreading. The water supply provided by BRE was set to provide 1 bar of pressure at the most hydraulically remote sprinkler head when all of the sprinklers in the assumed maximum area of operation (AMAO) were discharging.

The sprinkler system considerably reduced the fire temperatures compared with the CLG test, and considerably reduced the overall visible size of the fire (although fire size has only been assessed qualitatively). Whilst the fire did spread to the upper vehicle, the upper vehicle did not become fully involved, so it is the opinion of BRE Global that the risk of fire spread beyond the test geometry (vertically or horizontally) to other nearby cars is significantly reduced by the presence of a sprinkler system.

The test has demonstrated the potential benefits of installing a sprinkler system into a car stacker, providing the system is designed for the specific risk and with the installation based on appropriate standards and guidance. 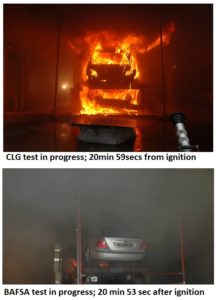