Fitted into the homes of those identified as vulnerable and at particular risk to injury from fire, 37 Portable Misting Systems (PMS) have been installed into Derbyshire homes since the start of the Service’s ‘Think Sprinkler’ campaign in 2011.
I 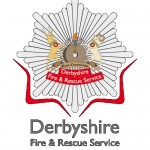 n the past month, three of these systems have been attributed with saving the lives of three individuals, all of whom had been previously identified as vulnerable and in need of the protection given by a Portable Misting System.

On the 4 August 2014, a PMS was fitted into the Sandiacre home of a 91 year old female identified as a heavy smoker with poor mobility and mental health. Less than 27 days later and the PMS proved its worth and was called to action when an accidental fire started in a rubbish bin located next to the chair in which the occupant was seated.
Hearing that thick black smoke had been billowing from the bungalow window, neighbour and carer Debra Turton made her way over to the house only to find that the PMS had fully extinguished the fire.
Both Mrs Turton and Malcolm Allen, the son of the occupant, have praised the Portable Misting System and attributed it to saving the occupants life.
Malcolm Allen said “Without a doubt, I am sure that the portable misting system fitted by Derbyshire Fire & Rescue Service saved my mother’s life.”
Debra Turton said “Neighbours had seen thick smoke coming out of the bungalow window and we all feared the worst. I couldn’t believe it when my husband and I got over to the house and found that the fire was completely out.

“The misting system really did do the job it was installed to do.”
In a separate incident three days later, another PMS was activated in the Doveridge home of a 93 year old female.
Identified as a heavy smoker with poor mobility, a referral from an Occupational Therapist led to a Home Fire Safety Check which resulted in two PMS units being fitted in November 2012.
At 04.03 on Wednesday 3 September 2014, a small fire was accidentally set in the bathroom of the property. The smoke from the smouldering fire in the bathroom activated the smoke alarm in the property before drifting into the bedroom activating the PMS.
The PMS not only suppressed the fire in the bathroom but went on to put the fire out. 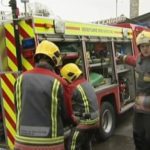 On arrival fire crews initially thought the call was a false alarm due to the occupant smoking under the smoke alarm. It wasn’t until further inspection that crews noted that there had been a small fire located in the bathroom.
It seems things really do come in three’s. On the 6 September DFRS was called to a house off Uttoxeter New Road where a 68 year old gentleman had left his cooking unattended.
The PMS which had been fitted to help safeguard the individual activated and extinguished the fire. A fire crew from Kingsway Fire Station attended the incident and on arrival confirmed that the PMS had done its job and fully extinguished the fire.
Area Manager, Steve McLernon said “These three separate incidents highlight the lifesaving ability of portable misting systems. If there hadn’t been misting systems fitted into these homes, the outcome of each incident could have been tragic.”
“Derbyshire Fire & Rescue Service is committed to safeguarding those vulnerable to fire. Working in partnership with local authorities and registered social landlords, the Service is working to fit domestic sprinklers or portable misting systems into as many homes as possible.”